To Vote OR NOT to Vote 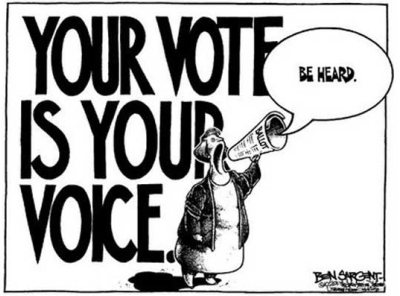 It is trite when one says that ‘Democracy is not a spectator sport; it demands participation’. Democracy, the world over, envisages the Government to be: Of the People, By the People and For the People. The Constitution of India, given by the people of India to themselves, has provided for a system of Universal Adult Suffrage to secure and strengthen good governance. The Constitution has vested the exercise of power in the Legislature to make laws with respect to all matters, necessary for securing the due constitution of the Houses. The ‘due constitution’ of the Houses can be secured only when it reflects the true ‘will’ of the electorate. Admittedly, a substantial portion of citizens abstain from casting their vote, which results in an inaccurate reflection of the ‘will of the people’ in their choice of representatives, defining the ‘constitution’ of the House/s.

Being concerned with this perennial situation where the constitution of the House/s may not reflect the true ‘will’ of the people, only on account of the fact that a substantial number of citizens have abstained from voting, for various reasons, I felt it appropriate to pen few thoughts on the said issue, which is a serious concern for our nation. The present Government’s stated commitment to good governance and intent of strengthening parliamentary democracy, inspires confidence in me to freely share my thoughts.

The recent polling trends indicate the voter turnout to be 65.95 % in the year 2014, which increased by 2% in the year 2019, in respect of the Lok Sabha Elections. However, there has been a steep decline in turnout in many states in 2019, as compared to the previous election years. In any case, as per the information available in public domain, out of 9 Crore voters eligible to vote, 2 Crore 97 Lakhs abstained from exercising their franchise. Hence, the ‘will’ of a substantial number of voters remains un-reflected in the Parliament.

Notwithstanding that the definition of electoral rights u/s. 79 (d) of The Representation of the People Act, 1951 includes the right to refrain from voting at an election, the Hon’ble Supreme Court in its judgment in W.P. (C) No. 161/2004 titled as People’s Union for Civil Liberties & Anr. Vs. Union of India & Anr. was pleased to direct the Election Commission to provide necessary provision in the ballot papers/EVMs and another button called “None of the Above” (NOTA) in EVMs so that the voters, who come to the polling booth and decide not to vote for any of the candidates in the fray, are able to exercise their right not to vote. Thus, the Hon’ble Supreme Court has acknowledged the right of voters to refrain from voting for various reasons and hence ensured that their choice not to vote is also reflected in the NOTA category. Hence, in the current scenario, there is a provision to record unwillingness of voters to choose from the nominee candidates, by recording their choice to be NOTA. Thus, the electoral right to abstain has also to be recorded and the fundamental duty cast upon the citizen to exercise franchise cannot be neglected, by complete abstinence and No-Show. Similarly, while failing to perform their fundamental duty, such abstinence is also a violation of the fundamental right of other citizens to have a duly constituted parliament, reflecting the true ‘will’ of the people.

The Election Commission has introduced various game changing reforms, which are laudable and have gone a long way in bringing about political justice, aimed at achieving parliamentary democracy in its strictest sense. Thus, having faith in the intent and commitment of the Government and the Election Commission, I am requesting you to take appropriate measures to make the exercise of franchise compulsory, of-course with suitable exemptions, failing which, such abstinence may invite certain disqualifications, as may be deemed appropriate. Already, as many as 28 countries in the world have realised the importance of the Parliament to reflect the true will of their people and have thus made voting compulsory in their respective countries and have enforced the same, in a manner which involves withdrawal of some services or subsidies or disqualifications in public employment or any other state sponsored services etc. It is trite to say that one citizen’s abstinence amounts to the violation of the collective right of the society. Even the Hon’ble Supreme Court has observed that it is a fallacy to think that in our Constitution, there are only rights and no duties. The provisions in Part IV of the Constitution, enables the legislature to build a welfare society and that object may be achieved to the extent the Directive Principles are implemented by legislation.

In conclusion I implore all the citizens of this country, who have pledged to themselves the constitution to uphold its core values, and to abide by the same, and thereby help themselves in establishing a government which is truly BY the people; FOR the people and OF the people.